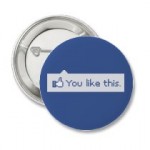 One important discussion centered around EdgeRank, Facebook’s formula for determining what items show up in the Facebook news feed. To explain further, every Facebook profile has a live feed and a news feed. The feed is a stream of content and Facebook status updates coming from your friends, groups, causes and the pages you Like. For every unique profile (or Facebook account) there is a unique feed. Your feed is different then mine because we each follow and friend different people/organizations. The live feed is a real-time stream of posts that populate as they occur. The news feed is a little bit more complicated. Facebook determines what should go in your news feed based on your previous behaviors, and not everything makes the cut.

According to the Facebook consultants at BrandGlue, 1 in 500 updates make it to the news feed. How does it work? If you like or comment on updates from one particular friend quite often, you are likely to see that person’s update in your news feed on a regular basis.

To use a personal example, I tend to like or comment on updates from my friend Juan because he is hilarious, my sister who is expecting her first baby, and Arizona Highways’ page because they are always providing great content. Because of my tendency to do so, my personal news feed usually includes an update from one if not all of those profiles.

That’s the non-scientific method for determining what happens on the Facebook news feed. During the f8 conference, Facebook did what Google has never done; they provided the mathematic formula behind news feed optimization. Here it is:

Note: From this point forward I’ll use Facbook’s terminology regarding objects and edges. If you don’t speak Facebook, an object = a status update or post. An edge is a comment, like or interaction with that object.

Based on this formula, an object’s likelihood of appearing in a news feed is a function of three elements:

Let’s discuss each in plain English. I’ll also provide a brief explanation of what Facebook page administrators can do to take full advantage of this formula.

Affinity Score – This number defines the relationship between object creator and recipient. Those who comment and like your personal updates have a higher affinity than those that do not.

What this means to you: Create objects that appeal to different kinds of connections. If you see the same people commenting and liking a specific type of object like photos, create a different kinds of objects like questions or polls to elicit a response from other connections. The more variety you have with the profiles that provide feedback and like your objects, the greater overall reach your page will have in the news feed.

What this means to you: Develop a strategy for creating objects that will generate feedback from your connections. Entertain, educate/enlighten, make invitations, say “thank you”, ask questions, etc. View every post opportunity as a method for garnering important insights and learning more about your page connections.

Time / Recency Score – This number is a reflection of how long ago the edge was created. Each edge will lose its mojo very quickly. For example, the oldest edge in my news feed right now was created 42 hours ago. Most were created in the past 18 hours.

What this means to you: Allow each object you create to gain some exposure. Creating back to back to back objects in a single afternoon will stifle each object’s ability to garner comments and likes. Meanwhile, adopt a regular posting schedule (like once or twice a day) so that you always have an object and its related edges placed in the news feed of your most loyal connections.

Helpful? Feel free to comment if more clarification is needed.

Teach to Fish is: Chris Sietsema